We would like to inform that the deadline for submitting abstracts for the AgroVet-Strickhof conference is extended to the end of June 2021. Please find the word template in the download area. 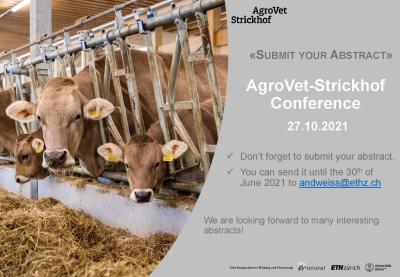 Exciting abstracts have already been submitted. Now we hope and look forward to receiving more interesting abstracts. For any questions, please feel free to contact us by mail: andrea-weiss@ethz.ch.

Katrin Giller, senior assistant in the research group for animal nutrition, gives an insight into the current research priorities in the research facilities of AgroVet-Strickhof (from minute 39 and following). In it, she explains, among other things, how the production of methane emitted by cows can be measured and also reduced.

Learn more about AgroVet-Strickhof in the following short video:

Prof. Dr. Michael Kreuzer (*1956), currently Full Professor of Animal Nutrition in the Department of Environmental Systems Science at ETH Zurich, is to retire at the end of July 2021.

Prof. Dr. Mutian Niu (*1989) has now been appointed by the ETH Board to replace Prof. Dr. Michael Kreuzer. He intends to start on June 1, 2021. The article can be found in the ETH News section.

He is currently Assistant Professor at the University of Pennsylvania, USA, as Tenure Track Assistant Professor of Animal Nutrition in the Department of Environmental Systems Science. Mutian Niu’s main area of research lies in quantifying and reducing environmentally relevant emissions from livestock farming, and is of considerable help in making the sustainable production of animal source foods more socially acceptable. His professorship is attached to the AgroVet-​Strickhof Education and Research Competence Centre and will make a substantial contribution to this cooperation between ETH Zurich, the University of Zurich and the Canton of Zurich.

We look forward to working with Prof. Mutian Niu and wish him a successful start.

the second AgroVet-Strickhof conference is planned to take place on the 27th October 2021 as an online event. The topic of this year's conference is "Networking Research and Practice - Agriculture of the Future". You can submit your contributions for the poster session from now on.

The registration of the contributions will be done via your submitted abstract in English. you can find the template in the download area. You can submit this from now until May 31th to andrea-weiss@ethz.ch. Posters as well as abstracts must be written in English.

The aim of the meeting is to provide a platform for researchers, students, practitioners, and interested conference attendees for a lively exchanging of experiences.

We are looking forward to exciting contributions and hope to welcome you at this year's AgroVet-Strickhof conference. For any questions, please feel free to contact us by mail: andrea-weiss@ethz.ch.

AgroVet-Strickhof conference / Save the Date

Due to the Corona pandemic we have to postpone the planned AgroVet-Strickhof meeting from January 2021.
The conference will now take place on Wednesday, 27.10.2021 in the AgroVet Forum in Lindau. Please reserve this date in your agenda already today.

The Conference Organisers are working on preparations and more information will be provided in February 2021 as well as details on how to submit abstracts.

We are already very much looking forward to the conference and hope for numerous participants and exciting presentations.

Yours sincerely
Head of Research and Team

The first two years of AgroVet-Strickhof were dominated by intensive research and educational activities.

AgroVet-Strickhof, the education and research center for farm animals, looks back on two successful operational years. The cooperation Strickhof, ETH Zurich and the University of Zurich has grown closer together and is setting new standards in research and education. The figures speak for
itself: In 2018 and 2019, more than 40 scientific articles were published annually. The young scientists were equally successful in presenting their projects at numerous symposia in Germany and abroad (50 in 2018, 92 in 2019). No less spectacular were the training and further education courses for future veterinarians, agricultural students and agricultural pupils as well as practitioners. The focus was mainly on cattle: lactation physiology, pregnancy testing, linear description and courses on hoof care, to name but a few. But the horse is also part of the training. The grooms in training could, for example, try out the anatomy and the application of bandages in Lindau. The head of research and the team have their hands full, as the 137th research project has already been submitted and processed from the opening until the end of 2019. In addition to the organizational issues in the laboratory, the execution of the experiments must also be coordinated with the company. The accommodation and care of the animals during the implementation of the research projects must be well thought out and prepared. Research projects on animal health as well as feeding experiments on methane reduction and replacement of soya in rations in agricultural livestock have been successfully completed. Research projects on stable floor renovation, digitalization and liquid manure experiments are also in the portfolio. In addition to day-to-day operations, the research management and the team are also working on other projects. The finalization of the conversion in Früebüel was approached in a structured and successful manner as well as specific construction measures in the Metabolism Center. For example, technical adjustments were made to the respiration chambers for keeping of fattening cattle, breeding sows and fattening pigs, as well as the installation of an automatic feeding system including silos for pig farming. In order to be able to produce specific test feeds on site, AgroVet-Strickhof has also been registered as a feed manufacturer and follows the strict specifications for feed production, as it is also the case with feed mills. Numerous guided tours (2018: 90; 2019: 68) indicate great interest in the new campus in Lindau. In recent years, almost 7,000 people have visited the campus. The two major events, the Swiss Cow and the AgriTechDay, were the most well attended (approx. 800 and 1,500 visitors respectively). In addition, many participants of further training courses took the opportunity to have the experts explain the stables to them after the course, which often led to exciting discussions that clearly showed the need for practice-oriented research. It remains exciting for AgroVet-Strickhof and also in the Corona year 2020 training and research will continue to be successfully carried out, although in a different way than usual.

AgroVet-Strickhof
The AgroVet-Strickhof education and research center, operational since 2018, is a cooperation between Strickhof, University of Zurich and ETH Zurich. It is a place where university teaching, agricultural education and training and research are closely interlinked in a unique way. At AgroVet-Strickhof, scientists and practitioners work hand in hand with the aim of gaining insights into how animal welfare and sustainability in livestock farming can be promoted. Under the approach "From Feed to Food", questions from the fields of livestock science, animal health, digitalization and smart farming are approached in an interdisciplinary, practical and holistic way. The possibility of conducting training and research on farm animals and flora at three levels of altitude is a major advantage of AgroVet-Strickhof and is unique worldwide, because AgroVet-Strickhof extends over the four operating sites of Lindau (ZH), Wülflingen (ZH), Früebüel (Walchwil ZG) and Alp Weissenstein (Bergün GR).

At this year's trade fair from 20th to 23th 2.2020 you will find know-how, top-class animal exhibitions and a wide range of products for the modern agriculture. AgroVet-Strickhof will also be there, visit us at our stand together with Strickhof Lindau 1.0.17.

At Suisse Tier from 22 to 24 November 2019 you will meet leading suppliers and experts from the entire Swiss livestock industry. AgroVet-Strickhof will be there, visit us at our stand. Link to the Suisse Tier Homepage

As already announced in November 2018, the first AgroVet-Strickhof conference will take place on 1 July 2019. Learn more about the current and planned research work and exchange ideas with the authors and researchers in personal conversations.

Where? In the Forum at the AgroVet-Strickhof, Eschikon 27 in 8315 Lindau

You can find the program here: PDF (GERMAN) 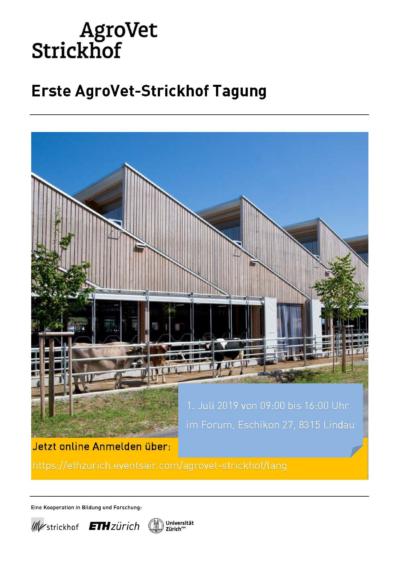 Start of construction on Früebüel in July 2018

After the building application was approved end of 2017 the construction work will start in July 2018.